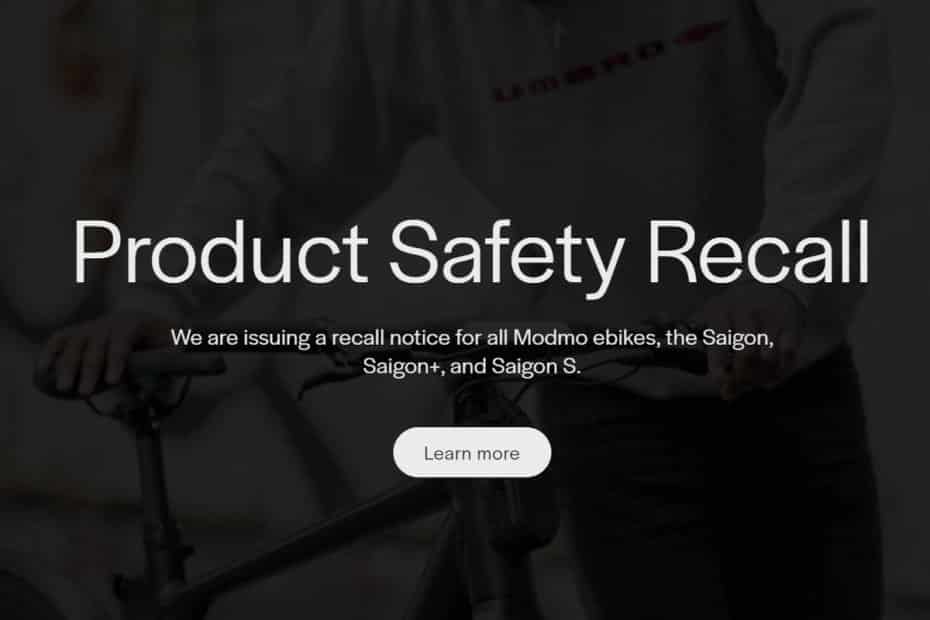 Another uproar about Modmo. Last summer, customers complained about extremely late deliveries and missing refunds. Now the manufacturer is recalling the majority of its ebikes delivered to Europe. At the same time, the company is considering insolvency proceedings.

1. What is the cause of the recall?
2. What should those who ride a Modmo ebike do?
3. What are the consequences of the recall?
4. Who else is affected by the recall apart from the customers?
5. What were Modmo’s original plans for the coming years?

1. What is the cause of the recall?

But let’s take it one step at a time. At the end of October, on the 26th to be precise, Modmo voluntarily recalled its Saigon, Saigon+ and Saigon S models. This was triggered by several cases in which the battery compartment lock had released itself while riding and the battery had fallen out of the down tube. For all the above-mentioned versions of the Saigon, this means a particularly high risk of falling. The compartment for the battery integrated in the frame opens downwards towards the bottom bracket. Consequently, a battery that slips out threatens to fall onto the pedals, cranks or directly under the rear wheel. 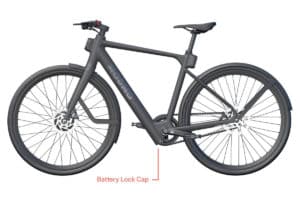 On the Saion, Saigon+ and Saigon S from Modmo, the locking flap for the battery compartment can open, causing the battery to fall out while riding.

According to several Irish media, this has happened to at least seven people. They have filed a complaint against the company.

The recall affects all bicycles of the three models sold between 3rd May 2021 and 25th August 2022 in the following countries:

Apart from the threat of a loss of image, this is a serious setback for Modmo from an economic point of view. For example, “Stickybottle”, an Irish cycling magazine, reports that the German market alone would account for about 85 percent of Modmo’s turnover.

2. What should those who ride a Modmo ebike do?

In a special page set up on its website, the manufacturer advises not to ride one of the ebikes with immediate effect. Those who own a corresponding model can fill out a form on the website. Afterwards, the customer service is to contact them. In the form, owners can provide bank details through which Modmo would like to refund them money. Whether this will be the entire purchase price or only a part of it is not mentioned. Nor is it specified what is to happen to the bicycles. Modmo writes on the page that the decision to recall was difficult. But the safety of the customers is the company’s first priority.

3. What are the consequences of the recall?

Only a few days after the recall was announced, the Irish High Court in Dublin agreed to open insolvency proceedings for Modmo. Judge Siobhán Stack appointed Nicholas O’Dwyer and Colm Dolan as the provisional liquidators. According to the “Irish Times” newspaper, this was at the request of shareholder Bernand Coggins. The latter wanted insolvency proceedings to be opened because Modmo’s business accounts would show a loss of £4.1 million from January 2022 to the end of September 2022.

Apparently, Coggings fears that the recall will incur high costs and result in Modmo being unable to pay its debts. This is likely to be the context of the draft recovery plan that Modmo presented in September. Its implementation seems to be acutely endangered by the current events. 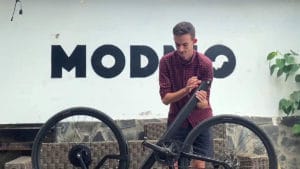 Just two years ago, company founder Jack O’Sullivan himself had shown the removal of the battery in a video.

In principle, Modmo should have plenty of capital. According to “Stickybottle”, the company has received around 8.7 million euros from investors since it was founded in 2014. Around five million euros alone probably came from the Irish building contractor Sean Mulryan, who is thus one of the largest shareholders in the company. In its report, the “Irish Times” estimates Modmo’s stock to be worth two million euros. However, the valuation refers to the time before the recall.

Although the High Court appointed the receivers, the actual insolvency proceedings were postponed until a later date.

4. Who else is affected by the recall apart from the customers?

The defect in the battery compartment and the associated recall will of course directly affect the company’s workforce. Information about the number of these people differs. On the one hand, the “Irish Times” speaks of seven employees in Ireland and eight in Vietnam. At the Asian site, Modmo has a subsidiary that assembles the ebikes. There is also a warehouse in Germany.

In contrast, “Stickybottle” mentions 35 employees in Vietnam, whose number should actually have increased to 100 by the end of the year. In Dublin, at the headquarters, there are currently ten people working.

5. What were Modmo’s original plans for the coming years?

At the beginning of the year, the future of the company looked very promising. With the prospect of millions of dollars of investor money behind it, Modmo was talking about opening its own stores. Entry into the US and Canadian markets was envisaged. At the Eurobike in Frankfurt, the manufacturer showed a completely new model with a mid-motor, the Modmo NX12. Its development was to continue. The market entry date was set for the end of 2023. The coming weeks and months will show how this project and the company in general will proceed. 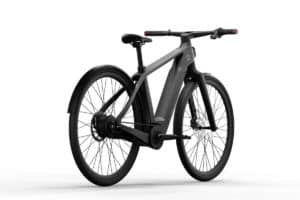 Study of the Modmo NX12 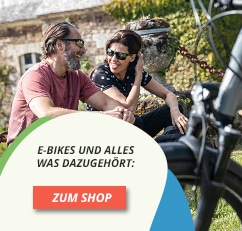