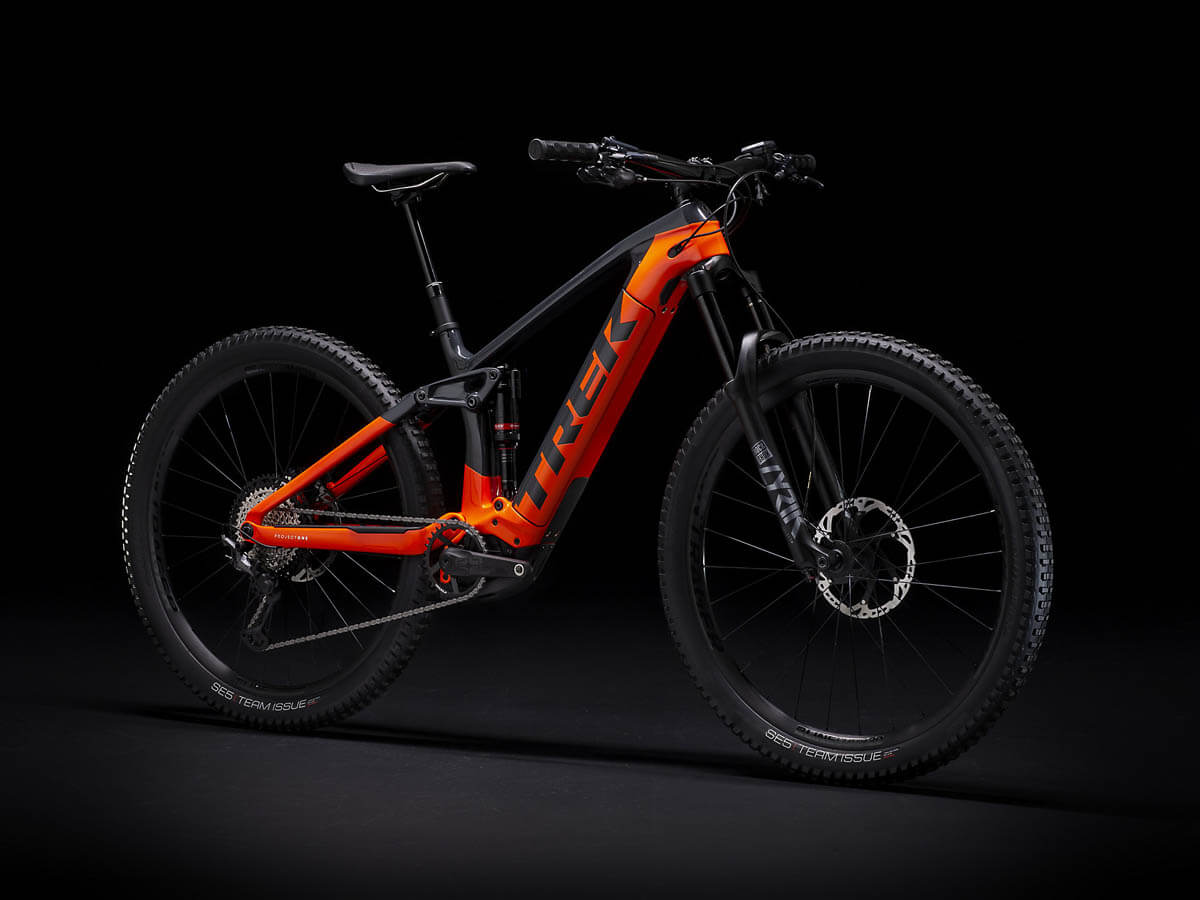 In May, many manufacturers were still pondering how and where they could present their 2021 innovations this year. Trek took the plunge and simply showed two complete model lines, even though they were not yet available. Now the delivery date is getting closer and the US-Americans are pushing a brand-new version of their Fully E-MTB – the Trek Rail 9.5.

If you also want to save weight on your e-bike and want power transmission to be as efficient as possible, carbon is the frame material of choice. And apparently there are more and more bikers with such high demands. At least Trek seems to share this view. The Trek Rail 9.5 docks at the lower end of the carbon segment. That’s where the Trek 9.7 used to be.

Equipment with the rating “solid”

While trying to make carbon even tastier for all of you, Trek fortunately doesn’t skimp on the other components too much. Basically, there are three main features where Rail 9.7 and the new Rail 9.5 differ. Point one is the suspension fork. The Trek Rail 9.5 has a RockShox 35 Gold RL, which replaces a RockShox Yari RC of the Rail 9.7. Furthermore, the drive is on the lowest level that Sram offers for its Eagle family. It is mostly the SX group, which is mainly found on complete wheels. In detail this means a slightly heavier crank. The rear derailleur and cassette, on the other hand, are in principle on a par with the components of the next higher group with the abbreviation NX.

The third noticeable difference is the display. On the Trek Rail 9.5 you get a Bosch Purion instead of a Kiox. Depending on what you usually use your display for, this downgrade will be more noticeable – or not. The data sheet shows that there is also another hydraulic disc brake mounted. The Tektro model is not far behind the M6120 from Shimano. Both work with four brake pistons. So, in practice this should turn out to be quite equivalent.

A look at the rest of the range is worthwhile

However, those who think that this goes too far in total have two chances. Either take Trek 9.7 and pay a total of about 1.400 euros more. Or simply let carbon be carbon and opt for the Trek Rail 9, for example. Although it “only” has an aluminium frame, it is several lengths ahead of both the Rail 9.5 and the Rail 9.7 in terms of other features.

Since most bicycle fairs haven fallen victim to the Corona pandemic this year manufacturers did have to think about new ways launching their new models for 2021. Being one of the first Trek decided already in June to introduce the e-bikes for 2021 via online presentation. So, the E-Fully Trek Rail and the Trek PowerFly e-mountain bike counted among the first models, everybody reported about without ever having ridden them.

The first models we have already listed in our online shop. You can pre-order them (directly in the shop or via our customer service by phone or mail if you have any questions). Because then the motto is: First come, first serve! So, it is worth ordering in advance. The first deliveries we expect from December 2020.

A first stocktaking shows that Trek has been rather cautious in its approach. There is a Bosch Kiox display with theft protection where a Purion was installed before. With other models you will discover a different wheel set or different tyres. But basically, you can orientate yourself very well on the season 2020 models.

In many respects the composition of the bikes has so far been very harmonious. When looking at the two top bikes among the fullys, once again hardly any wish remains unfulfilled. The Trek Rail 9.9 X01 and the Trek Rail 9.8 XT have a RockShox ZEB with 160 millimetres of suspension travel mounted on the proven carbon frame. The new RockShox Super Deluxe Ultimate RT3 provides sufficient damping. The electrical components continue to come from Bosch throughout. The Perfomance CX mid-engine, the PowerTube 625 rechargeable battery integrated in the down tube and the Kiox display with anti-theft protection guarantee harmonious interaction.

So there is really only the legendary choice of conscience left for you: SRAM or Shimano. As the name suggests, the Rail 9.9 X01 is equipped with the Eagle. It’s also the only model in the entire Trek Rail range to feature OCLV Carbon MTB wheels. Extremely shock-resistant and durable, these are also unrivalled for their reduced risk of punctures.

The Rail 9.8 XT, on the other hand, uses the Shimano XT. The wheelset here is a Bontrager Line Comp 30, but it should deliver the same convincing performance as its carbon counterpart.

3. Trek Rail 9.7 and Trek Rail 9: little medium, much class in the middle class

The Trek Rail 9.7 and the Trek Rail 9 do almost as good as the top models. The differences are really marginal in many details. At this level, Trek relies more on SRAM in regard of the gearing. On the Trek Rail 9.7 you will find the NX Eagle group, on the Trek Rail 9 it is the GX Eagle. The brakes are Shimano – M6120 on the Rail 9.7 – and SRAM – Code R on the Rail 9. At the front you get a comfortable 160 millimetres. This is provided by the RockShox Yari RC or the RockShox ZEB Select+. The 150 millimetres at the rear end of the bike also give you enough freedom for your ride in the most demanding terrain.

The basis for the entry level is an aluminium frame, which Trek calls Alpha Platinum Aluminium. It is also equipped with components that guarantee you a lot of fun on the trails. The Trek Rail 7 is equipped with Shimano drive system throughout. In detail, this is the SLX gear group paired with the M6120 hydraulic disc brake. As on the Trek Rail 9.7, you will also find 160 mm RockShox Yari RC suspension fork. So much for high quality without exception.

The RockShox Delux RL suspension fork installed on the Trek Rail 5 625Wh also offers 160 millimetres and ranks closely behind. In this case the 12 gears of the SRAM SX Eagle are combined with Tektro hydraulic brakes.

Also in this price segment, you get the currently most powerful engine from Bosch, the Perfomance CX, together with the Intube battery PowerTube with 625 watt hours. The only difference to the more expensive Trek Rail models is the somewhat simpler Bosch Purion display. This also has no theft protection.

Trek also has new splashes of colour at the ready. But even here, the concept of the last few years is clearly continued. This means that there are usually two colours on the bike. In this way, Trek sets specific accents and does not pull the bikes through the entire colour box.

If you’re looking for an e-mountain bike that feels obviously comfortable off-road and cuts a good figure on the road at the same time, you might want to go for the hardtails from Trek. They have been listening to the name PowerFly for years. They are bikes for those of you who regularly set out on a trail adventure in the great outdoors, leaving out the steepest and roughest paths. The Trek PowerFly has a smaller seat angle than the Rail. As a result, you sit more stretched out and less upright on the bike. At the same time the bottom bracket hangs a little lower above the ground. This lower ground clearance, together with the significantly shorter fork travel, underlines the more everyday character of these bikes. Some models have permanently mounted mudguards and luggage racks.

The e-drive is absolutely comparable to that of the rail models. Each PowerFly has a Bosch mid-mounted motor that is tuned to e-mountainbiking. In addition, there is state-of-the-art battery technology for the longest possible range.

At the top of the PowerFly series there are the Trek PowerFly 7 and the Trek PowerFly 7 Equipped. Except for the permanently installed mudguards, the luggage rack and the lighting system on the PowerFly 7 Equipped, both bikes have absolutely identical equipment. Which one suits you best depends on what you want to do with it. If you are mostly on the road in wind and weather, protection from the elements and compliance with traffic regulations play a more important role. The hand points strongly in the direction of the Equipped version. If your tours take you away from the road and into woods and meadows, the more puristic PowerFly 7 is the better choice.

The 12-speed drivetrain is a mix of Shimano XT and SLX components. Thanks to the RockShox 35 Gold RL and its 80 millimetres of suspension travel, everyday obstacles won’t make you sweat. The M6120 hydraulic disc brakes from Shimano, which already rein in the Rail 9.7, ensure sufficient control. You can expect endurance, agility and reliability at the highest level from Bosch’s electric drive. The 7 Series models are the only ones in the PowerFly series to feature a Kiox display with anti-theft protection.

When looking at the middle class of the PowerFly series, fine differences become apparent. The Trek PowerFly 5 clearly tends to the slightly higher quality 7 series models. Only nuances differ from them. A somewhat simpler suspension fork, disc brakes slightly below the level of the Shimano M6120 and the drive. In this case it comes from SRAM and is a mix of SX and NX components. The electric motor and battery, on the other hand, meet the standard of all previously mentioned Trek bikes for 2021. The Bosch Purion display is attached to the PowerFly 5.

A bit more plain equipped is the Trek PowerFly 4 625Wh. The 10-speed drivetrain stands out most clearly. But you should keep in mind: Only a few years ago this was the ultimate. Even with ten sprockets you have a wide range of gear ratios at your disposal. Suspension fork and disc brakes are once again a little below the level of the parts of the PowerFly5. The e-drive, on the other hand, has the same design with the Performance CX motor, PowerTube 625 battery and Purion display. From this side you can expect the same riding fun.

Functionally, the Trek PowerFly 4 Equipped’s equipment, which is geared more towards daily road traffic, offers some added value. The fixed mudguards and the light rear rack give you the same choice as when choosing between Trek PowerFly 7 and Trek PowerFly 7 equipped: Who do you prefer, the ride through the terrain or a more universal range of use?

Whatever your personal preferences, the DNA of these bikes is clearly that of a fully-fledged e-mountain bike. The XCM 34 suspension fork from SR Suntour with its 80 millimetres of suspension travel, combined with the Shimano Deore 10-speed drivetrain and Tektro HMD-275 hydraulic disc brakes, provides a solid basis for lots of fun in somewhat temperate terrain. 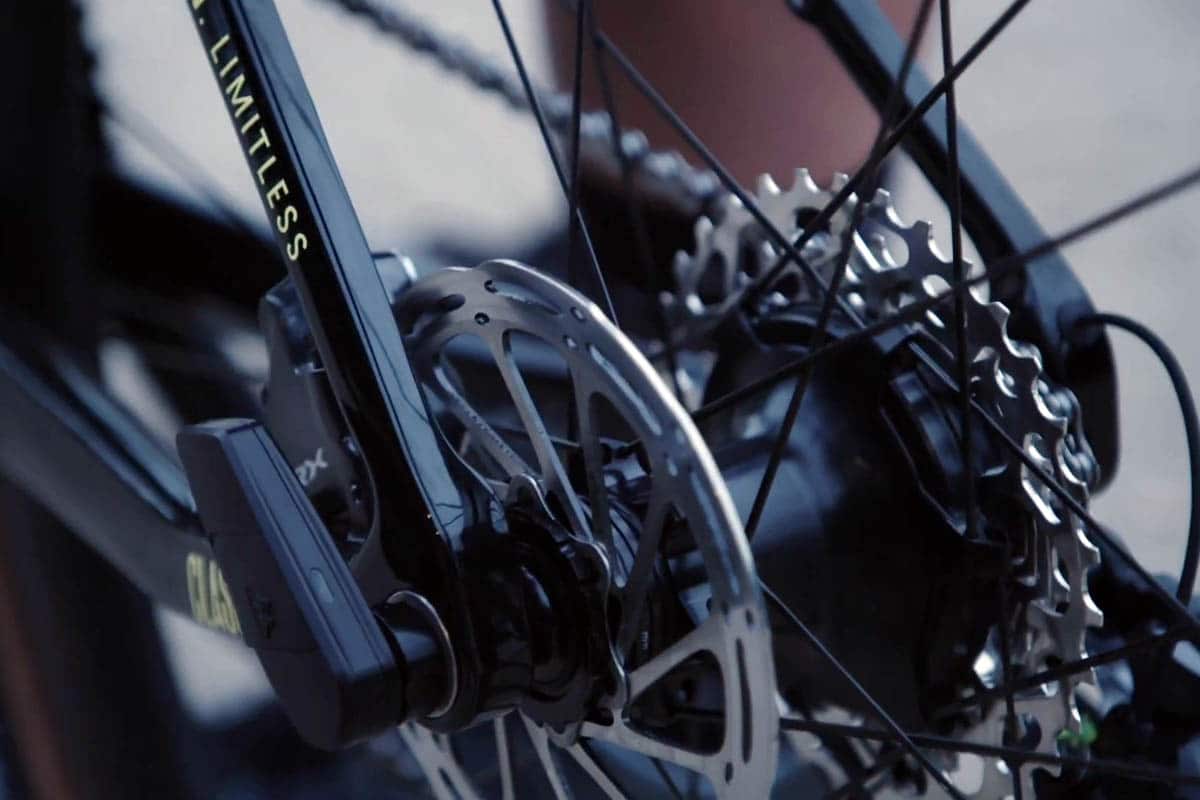 Only one chainring mounted, but ride like with two. Not possible? It does! And it looks quite promising.

An e-bike that comes with less because it wants to be more? Sounds confusing at first, but it makes sense. 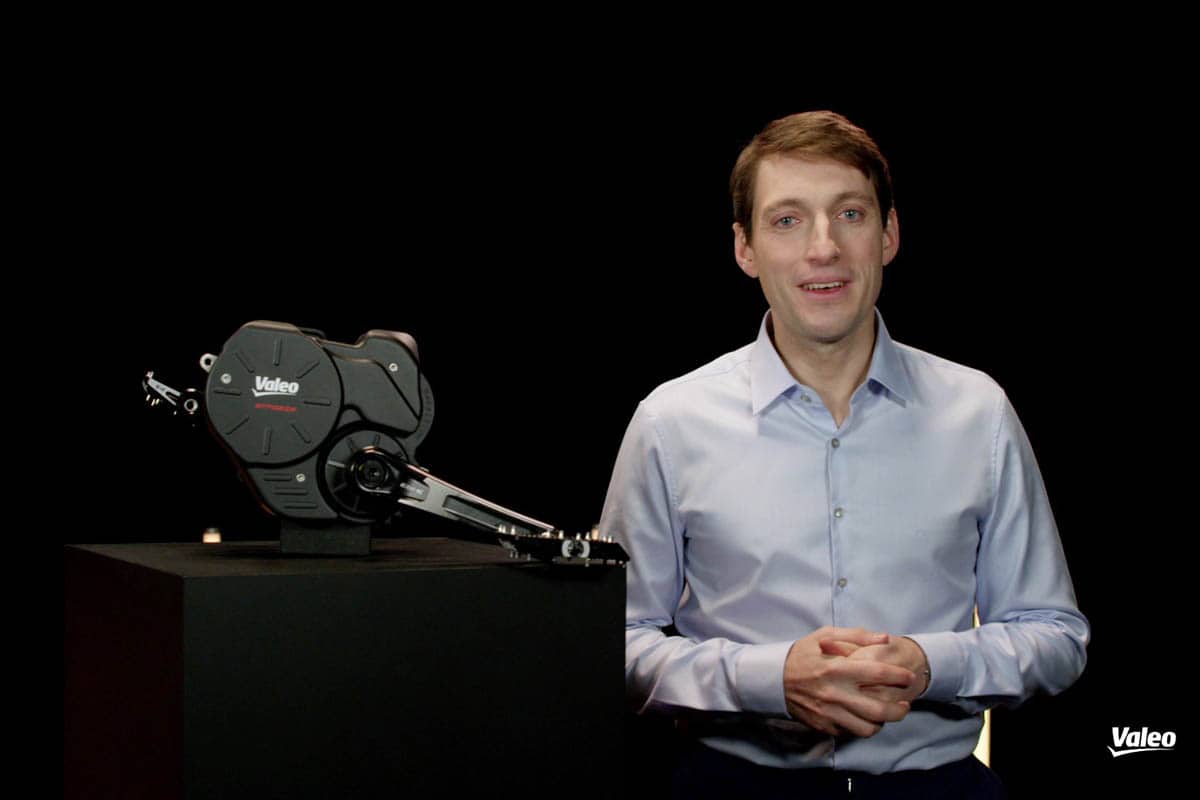 A noname that isn’t really a noname presents a new drive system for e-bikes. But this has yet to come of age.